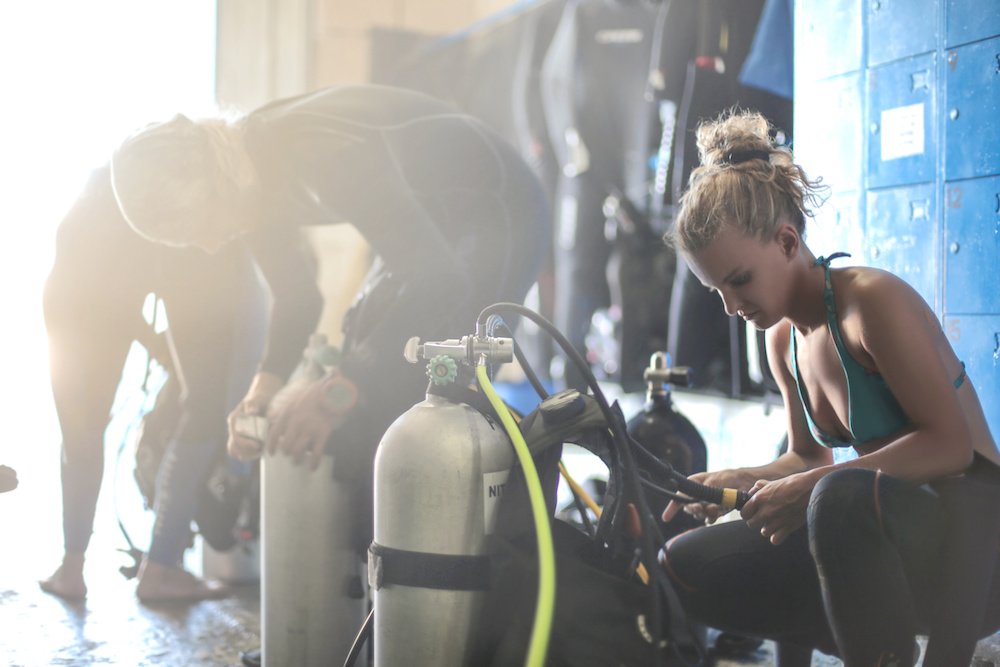 The Azores are known as beautiful, but that beauty extends beyond the land and landscape. In fact, the Azores offer some of the most beautiful diving experiences you can find in the entire world. In addition, diving Azores spots means you get to get up close and personal with some of the fastest and most gorgeous marine life.

Locations for diving in the Azores include wrecks, caves, and swimming alongside some beautiful animals. However, to start, there are a few things you should know before heading off to dive. Then, we will get into the must-see locations for great diving experiences.

There are a couple of things to keep in mind when planning on diving Azores. To start, the seasons play a big role in the conditions you can expect to encounter with diving. Those seasons will also impact what you can see while diving.

For example, you won’t be competing with many other divers in the winter, especially given the Atlantic storms that hit the area. However, during those winter months, you can see a whole lot of marine life, even though the water is quite cold, hovering right around 58 degrees Fahrenheit.

Visibility is another consideration. That visibility varies along the coast, ranging from 15 feet all the way to 120 feet. This has a lot to do with the thermoclines and upwellings.

You’ll likely enjoy very easy access in and out of the water, given that most of the dive companies of the Azores use Zodiac boats. Most of them also offer dive packages that typically include several offshore, deep blue, and coastal dives.

Given its location, you can expect to see a great deal of marine life when diving in the Azores. If you are doing some coastal diving, you’ll see things like pregnant stingrays as well as slipper lobsters. You’ll also see some groupers .

For whales, your best shot is between March and April, which is also when you are most likely to catch sight of dolphins.

You’ll really see a ton of marine life when you move offshore. There, you can expect to see marlin, tuna, wahoo, jackfish, and barracudas. Of course, in addition, the Azores are considered one of the primary destinations for viewing sharks. You can see whale sharks and hammerheads. You will likely see the sharks between the months of July and September.

The Azores sits just about 1,200 miles from Newfoundland and 850 miles off of mainland Portugal. The Azores is pretty young in ash and has a coast that is still covered with lava, ash, pumice, and other remnants of volcanic activity.

The majority of dive companies will speak some level of English, given how popular the area has become. However, the primary language is, of course, Portuguese.

The Azores is made up of nine different islands, all with their own culture and landscape. The temperature in the islands doesn’t usually get below freezing and is often quite humid. There are plenty of great spots to hit when diving in the Azores, but we’ve narrowed them down to the top five here.

This dive site sits only two minutes from the beach of Villa de Praia, and it is the most famous of all dive sites on Graciosa Island. The wreck sits 20 meters deep and is 40 meters in length.

This is a freighter that sank back in 1968 and has since become home to some incredible marine life. The large parts of the hull are still largely intact, while some parts have broken away and now serve as shelter to marine life.

The location of the Azores is quite unique since it is home to volcanoes. The geology of the area makes diving quite the adventure. There are tunnels, some of which are quite long, that connect to caves great for exploring.

This location sits a short three miles from Sao Jorge Island, making it quite easy to access. The very top of the reef sits at a depth of just 15 meters, and the waters that surround it offer some incredible views of marine life. This site is one of very few where you can be surrounded by octopuses, moral eels, and scorpionfishes all at the same time. The views are beautiful, as well.

The Seamounts represent the most famous of all Azores dive sites. They offer visibility that reaches 30 meters regularly, as well as incredible sightings of pelagic fish and devil rays.

The most well-known sites include the Dollabarat Reef, Alice Bank, and the Formigas Islets. Each one offers its own unique adventure and opportunity for exploration, with several different species of marine life available for viewing.

While you return to the mainland from any of these sites, you can get great views of birds, dolphins, whales, and turtles. It is usually the Seamounts that offer the best location for swimming with devil rays, but you can also spot them in other locations as well.

In addition, the Azores also represents one of the very few places on Earth that you can swim with the blue shark, one of the world’s fastest fishes. This is considered a once-in-a-lifetime experience for many scuba divers.

It is possible to dive with blue sharks on many of the islands of the Azores. The most popular of these is the Condor Seamouth, which is about 10 miles from Faial Island but can also be accessed just as easily from Pico Island.

The sharks in the area will typically inspect divers before they exhibit any signs of trusting them. However, after a bit of time, they are known to swim right alongside divers and the boat.

Many divers go to the Azores for the opportunity to swim with devil rays. These animals are quite harmless to humans and will almost play with divers as they swoop around them and dart back and forth around them.

If you’re unlike most, and you have a wholly different reason why you chose to go to the Azores for the summer, then the list of dive spots we have listed above will prove to be very useful for you.