If you are an avid scuba diver or want to learn the sport, you must have the right gear. Many times, people hear about split-fins and wonder if it’s a good option for them. It can be hard to decide if you aren’t fully aware of their benefits.

Atomic Aquatics was founded in 1996, so it is a relatively new brand on the market. However, the founders, Doug Toth and Dean Garraffa, had a passion. They wanted to set new standards for innovation while offering precision items that used superior materials.

Along with such, it is their goal to enhance and simplify your diving experience. You can find Atomic Aquatics products on the company’s website, but it also sells its wares on third-party e-commerce sites, giving you the convenience of shopping online. 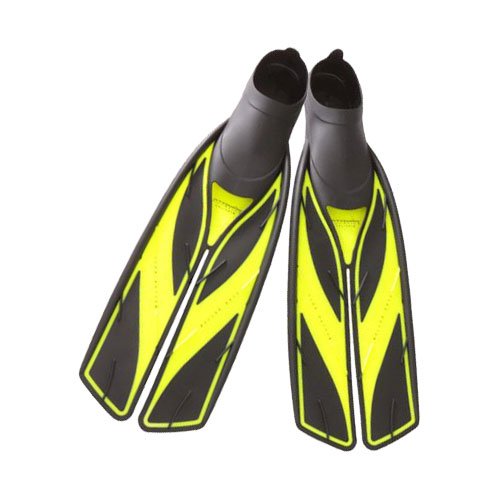 The Atomic Aquatics Full Foot Splitfins comes in three colors: black, pink, and yellow. You’ll also find a variety of unisex sizes, making it easy to find something that fits you well. Of course, the fins are designed for high performance and are streamlined to give you maximum speed and power.

These splitfins look a little odd at first until you realize that there is supposed to be a split in them. However, when you get them and try them on, you’ll immediately notice that they weigh less than half of an open-heel scuba fin. As such, this product is ideal for traveling.

In addition, you’ll be surprised at how comfortable the fins are. The open-toe ensures that your feet can breathe, and the foot pocket goes the length of the foot and feels soft.

We really liked the slim-line appearance of these fins. They use a no-nonsense style and seem to help you focus on the task at hand.

One thing we were unsure of was the fact that these fins did not have any strap for your feet. Instead, you simply slide the foot into the hole. Ordering the wrong size means that they can’t be used, but if your feet tend to swell, you also cannot adjust them during your dive session.

The TUSA brand is an extension of Tabata Co. Ltd, which is an international manufacturer of sporting goods. Its headquarters are in Japan, but it also has facilities in Taiwan.

This company was founded in 1952 by Kazuo Tabata. Primarily, he wanted to focus on innovation and quality. As such, his company has grown and strengthened throughout the years, and it is still going strong.

While you can purchase this and other scuba diving gear on a variety of third-party websites, it’s also possible to visit the company showroom in California to directly buy the products. 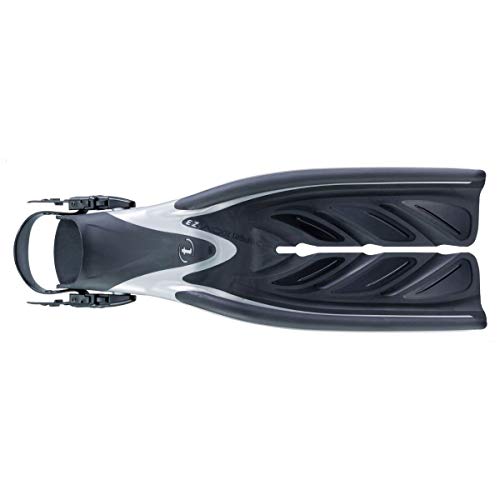 The TUSA SF-15 X-Pert Zoom Scuba Diving Fins offers an open-heel style with the split feature. It comes with spring straps, which allows you to easily remove them when you’re done scuba diving. Plus, it’s easier to adjust the straps throughout the day as needed.

This product offers propeller-fin technology, which means that the fin itself is shorter than a normal split fin. Nevertheless, it helps propel you through the water more easily.

These fins also come with a multi-flex blade system. This means that the fins work with you and tend to mold to your foot, allowing them to be an extension of your feet instead of working against you. The angled design of the blade is patented to the brand.

You’re likely to experience less fatigue and use less effort with these fins. Primarily, this is because these diving fins provide more power and speed regardless of the type of water in which you find yourself.

The one thing we loved most about these fins was the amazing design feature. You can get them in black, cobalt blue, or yellow, but we especially liked the modern appearance and the open-heel look.

We weren’t entirely happy that the fins were so heavy. It seems to be counterproductive, as you buy them to reduce leg fatigue. Plus, it could put you over the luggage weight limit, so be careful when packing.

This company primarily manufactures diving products, such as masks, fins, regulators, snorkels, and wetsuits. You can find dealers by going to the official website, but it’s usually easier to shop online at third-party sites. 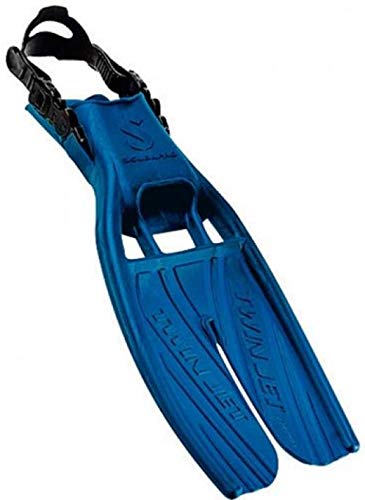 The SCUBAPRO Twin Jet Scuba Fins uses a patented design where the blades are angled slightly to provide more symmetry and power. Of course, the split-fin propeller technology is also patented. It allows you to get more forward motion without using as much effort.

You will see the vents toward the back of the fin, near the foot. These offer drag-reducing benefits and can significantly decrease the resistance of your up and down strokes. There’s also an extended soleplate, which acts as a lever, enhancing your stroke power.

This product comes in a variety of colors: yellow, cobalt, blue, and black. It also features an open-heel design with straps that clip. With these, you can easily adjust them or remove them at the end of the session.

We particularly liked the fact that you have tremendous power when you use these fins. You’ll be propelled through the water just by kicking from the hips and keeping your legs straight.

While it’s quite normal, we weren’t altogether happy that you had to use a scuba boot. Many products allow you to go barefoot if you choose the right size. These, however, require a scuba sock, which has to be purchased separately.

It is important to understand as much as you can about a product before deciding to buy it. We have come up with a buyer’s guide that talks about what split fins are, why they’re essential, and how to choose a pair. Once you read it, you’ll feel confident enough to buy the right pair.

1. Difference Between Split and Paddle Fins

The paddle fin is, by far, the most common style and was one of the first designed for scuba diving. Split fins are a newer invention, though they have taken the diving world by storm.

In most cases, paddle fins are more affordable and have a proven design. These blades are stiffer, but they always give you a controlled kick and are easy to use.

The split fin design requires you to exert less effort while kicking, though you still get the same amount of thrust as with the paddle fin. They’re an excellent option if you can’t generate powerful enough kicks or have ankle/knee issues.

These fins are designed to be used in calmer waters because it gets harder to use them when in heavy currents. When these fins are utilized in the way they should be, you reduce air consumption.

Split fins tend to have a differently shaped blade compared to the paddle fin. Forward propulsion is generated by the fin blade. It is usually best to choose a design that offers vents, which reduces drag.

The theory behind the split fin is that when the diver kicks the feet downward, the water channels itself through that split to create a spring-like action. This, in turn, increases the kick’s effectiveness and power while reducing fatigue.

Of course, the fins are highly popular with divers who have had knee surgery or experience knee pain. It works better because there’s less resistance on the joints.

However, there is a right and wrong kicking method when using such fins. Most people use a frog-style kick, but that doesn’t give you the power and thrust you need with the split. Instead, you need to do a straight or flutter action to propel yourself correctly.

Some critics have an issue with the split fins because of the improper kick. People are often taught the frog-style kicking method first, making it harder for them to learn other options.

4. How to Choose Dive Fins

It is a good idea to go to the store, at least once, to try on a variety of fins before making a final decision. You wouldn’t buy a car without driving it, and you shouldn’t buy a pair of fins without trying on a couple of types. If you’re new on the scene, it’s a good idea to try on different styles to make sure you know what you like.

Of course, many split diving fins are designed to be used with scuba boots. Therefore, you should be fitted for the shoes before considering the fins. If you don’t want to wear anything else, the full foot fin might be the best choice.

Primarily, split fins are designed for calm waters. You should have an idea of where you’re going to dive most often. When the area has a lot of waves, it might be best to go with a paddle fin.

Are you the type of person who wants to spend as much time underwater as possible? If so, split fins are likely going to be the best option for you because it reduces fatigue. You’ll last longer, which means you’ll get more use out of the fins.

5. What to Look for in the Best Fins

One of the biggest concerns people have is how to choose the right split fins. If you know this style is right for you, it’s important to buy the right pair. Therefore, we’ve come up with a few things to consider.

You can find full-foot and open-heel options, so it’s a good idea to determine which one you like better. The full-foot version is designed to slip on like a shoe and doesn’t necessarily require a boot. However, you can wear one if you like.

The open-heel design means that the foot slides into the fin, and there is a strap at the back to go around the heel. Make sure it uses spring straps that click close and have a quick-release feature. With these, you can easily adjust them throughout your diving session.

Some versions also have vents before the split design, which reduces drag within the water. This is an optional feature, but we do like the idea behind it. However, it is up to you to determine if you need even less resistance within the water

While some people might like the full-foot diving fin, we don’t feel that it gives enough support in this instance. As such, we decided that the TUSA SF-15 X-Pert Zoon Scuba Fins were the winner here. For one, the design was slick and modern.

However, we didn’t choose these as the best split fins based on looks alone. We liked the fact that we get to enjoy propeller-fin technology with a patented angle-blade design. We felt that this made it easier to propel our body through the water and reduce fatigue more than the others.

Best Snorkel Gear for Kids of 2021: Complete Reviews With Comparisons

Best Snorkel Gear for Beginners of 2021: Complete Reviews With Comparisons